Today I drive to Cincinnati to begin my Steamboat / Ohio River Elderhostel.
Before I leave I will make two stops. 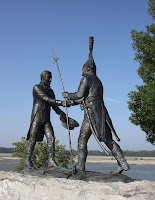 Across the Ohio River from Louisville is Clarksville, Indiana. In Clarksville is the Falls of the Ohio State Park. It was here that Meriwether Lewis and William Clark met to begin their Voyage of Discovery to the Western Sea. A statue of them shaking hands as they met again (Lewis had served under Clark in earlier military service) is found overlooking the Ohio river.

Also in the park is a replica cabin of the George Rogers Clark, the older brother of William.
George Rogers Clark was a American Revolutionary War hero who kept the Western U.S. (Illinois and Indiana later) from falling under the control of the English Red Coats. Both Clark brothers were living in the cabin when Lewis arrived.

Across the river in Louisville, in Waterfront Park is a newly installed statue of Abraham Lincoln Sitting on a Rock sculpted by a Louisville resident. Part of the Lincoln display is a series of engraved panels depicting events which occurred while Lincoln was in Kentucky. 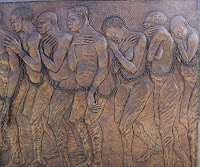 While visiting his best friend, Joshua Speed in 1841, Lincoln stayed for three weeks at the Speed home which as a slave plantation. When he and Speed returned to Springfield, Illinois on a steamboat, Lincoln witnessed slaves chained together on their way to New Orleans. He remarked with disgust at what he witnessed on that day. One of the panels depicts that formative moment.

While I was there the sun's position made determining correct exposure very difficult. As a result, the quality of the photos is less than I hoped for, but the experience of seeing this wonderful display made up for it.

I drove the 100 miles to the Cincinnati area and met my new Elderhostel friends.
Posted by Don Chamberlain at 7:39 PM