This morning began with a lecture by David Savage, a docent at the Cincinnati Museum Complex on the history of Cincinnati. Following the morning lectures we ate lunch at a restaurant called the Greyhound Tavern.

Following lunch we drove to the Union Terminal which houses a number of museums including the Cincinnati History Museum. As the name suggests, the facility began as a railroad terminal. In 1926 five individual railroads at different locations in city decided to pool their resources and build this terminal. In its heyday, the station handled 216 trains daily. As automobile travel increased and rail demand began to diminish, the station closed. In 1975 the building was sold to the city of Cincinnati. It was first converted to to a shopping mall; in 1986 work began to convert the building into a museum complex. Today the facility is the Amtrak Railroad Station, but also houses the Cincinnati History Museum, the Cincinnati Natural History Museum, a Children's Museum, offices for the Cincinnati Historical Society, in addition to shops and food services.

With the leadership of a docent we toured the History Museum for two hours. The highlight for me was a life sized model of riverboat; you could walk onto the boat and get the feeling of being on a real riverboat. I also enjoyed a huge display with trains running throughout a model of Cincinnati city.

Following our museum visit, we crossed the Ohio River into Covington, Kentucky and spent some time in their Riverfront Park where they had six statues of historical figures and with a series of murals depicting the history of the area. 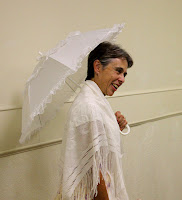 We returned to the motel. Following dinner, we were treated to a great presentation Tall Stacks and Tall Tales by speaker, Joyce Baer. She presented many tales from steamboat history including many written by Mark Twain.

All in all,the day was a great way to introduce us to Cincinnati History.
Posted by Don Chamberlain at 6:08 AM