Next morning I drove from Boonville back to Arrow Rock for Day 2 of the SFT Symposium.
The morning schedule featured two excellent speakers.

We met in the Arrow Rock Lyceum Theatre. Formerly a Baptist Church in Arrow Rock, it now is the site where professional troupes present plays throughout the season.
After a welcome and official opening by SFT Association leaders, Jim Denny gave a talk about the history of the Boonslick region ("The Boonslick: A Unique and Special Region"). It gave a great deal of perspective in understanding the trials and tribulations of the early area settler. Dr. James Harlan followed with a lecture/PowerPoint program entitled "It's All About Geography: The Impact of the Missouri River on Settlement Patterns and Santa Fe Commerce". Dr. Harlan has studied land surveys past and present throughout the state of Missouri and discussed their challenges and historic significance. After the morning talks we enjoyed a boxed lunch at the theater before boarding buses from tours of the area. This morning I was on the East Tour which took us to Franklin, New Franklin, Boonsville, and the Boon's Lick Salt Spring State Historic Site. At the site of Old Franklin we visited the location of the historic town where the Santa Fe Trail officially began in 1812. At that time, this town was the second largest community west of the Mississippi River in Missouri. Town resident, William Becknell left to seek western trade. A few weeks later following trading in Santa Fe, he returned with bags of Spanish coins. Word of his success spread and Santa Fe Trail commerce began.

However in the 1820's Franklin was destroyed by massive Missouri River floods. Today all that remains are a flagpole and some plaques honoring the past importance of this site.

We then drove along Route W toward the Boone's Lick Salt Spring historic site. As we traveled along this route, it was the same route followed by Becknell and those that followed him until Franklin disappeared. We arrived at te Boone's Lick Salt Spring Historic Site and hiked down the hill to the actual site of the spring. Not much remains of the equipment used to remove salt from the water in the spring (an excellent diorama of the mechanics of the salt spring is on display at the Arrow Rock Visitor Center).

From the Salt Spring we drove the New Franklin, Missouri. When "Old Franklin" faced flooding problems, some of its residents moved a few miles north of the river and established this town. It's downtown area features a DAR SFT plaque which says
"Beginning of the Santa Fe Trail". We visited that site.

We also visited the nearby "Hickman House" which is the oldest surviving building in the Boonslick County. Local members of the historic Society provided tours and treated us to lemonade and cookies. We also visiting the Historic Society building in New Franklin which they opened for us. Some of the floor joists in the house are believed to have come from the remains of historic fort which was built in the area during the War of 1812.

We returned to Arrow Rock (via Boonville). In Boonville is a wonderful overlook of the Missouri River (in Harley Park). The size of our bus prevented us from stopping, but I have visited it in the past. 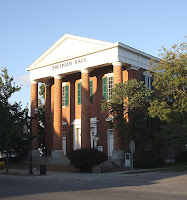 That evening participants drove back to Boonville for a barbecue dinner at the historic Turner Hall (again a former church). We then walked across the street to Thespian Hall (the oldest operating theatre west of the Allegheny Mountains. There we were treated to a performance of a play seen in the SFT period entitled "The Lion of the West". We were also entertained by two excellent musicians who again played period music.
Posted by Don Chamberlain at 12:20 PM